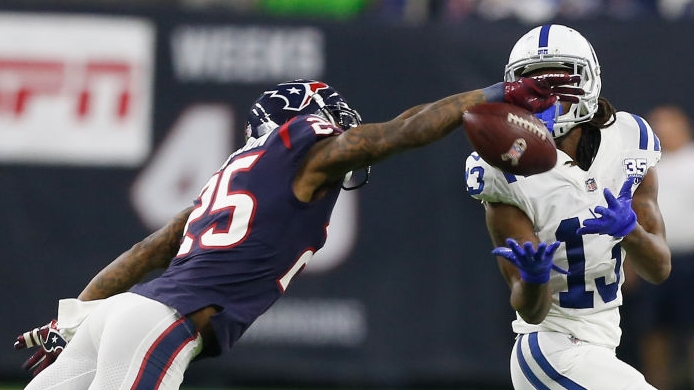 After nine training camps with the Houston Texans, Kareem Jackson reported to the Denver Broncos’ training camp last week, and the former Alabama standout is cool with it.

“This weather, it definitely beats being in the Houston heat,” Jackson said during a Saturday press conference. “But I feel pretty good about it. Being here, the guys have definitely accepted me with open arms. Always been a great group of guys here, and to be here with them and the new coaching staff with coach (Vic) Fangio and the rest of the coaches, I’m excited about it. Excited about the year and definitely looking forward to it.”

Jackson played mostly cornerback after joining Houston as a first-round pick in the 2010 NFL Draft, and his 16 interceptions are tied for the most in franchise history.

In March, Jackson joined the Broncos in free agency for a three-year, $33 million contract that included $23 million in guaranteed money — a signing bonus of $9 million, his 2019 base salary of $3 million and his 2020 base salary of $11 million.

Denver worked Jackson at safety during its offseason program, and it looks as though strong safety will be his position in the Broncos’ base defense, although he’s likely to play as a third corner, too, in some sub packages.

“Last year, I actually started out at the beginning of the year playing safety,” Jackson said. “I played safety throughout camp, I played like the first three games at safety, but because of injuries, I was moved back to corner, and in previous years before that, I would play safety in different packages that we had. I’m very familiar with the position, so it’s all just getting acclimated to our new system here and the defense.”

In addition to signing Jackson, the Broncos also added cornerback Bryce Callahan from the Chicago Bears in free agency.

“They’re coming together,” Donatell said. “It’s a really good group of guys. They’re jelling. It’s still very, very early. I just like the way they work together and the communication that we’re seeing on the field.”

In 1972, Denver posted a 5-9 record for its 10th consecutive losing season. The Broncos hadn’t had back-to-back losing records since then until last year, when Denver followed its 5-11 showing of 2017 with a 6-10 campaign.

After four consecutive seasons of placing among the top four teams in the NFL in fewest points allowed, Denver fell to 22nd in that defensive category last season. That helped spell the end of Vance Joseph’s two-year tenure as the Broncos’ head coach, replaced by Fangio, who as Chicago’s coordinator had the defense that gave up the fewest points in the NFL in 2018.

“It’s exciting,” Jackson said of joining Denver’s defense as Fangio and Donatell take over. “You’ve seen how the defense is being played with the group of guys that we have from the first guy to the last guy and what we think we’re capable of as a defense with the talent that we have in this system. It’s exciting to come in on a day-to-day basis and compete against our offense. …

“I’m definitely excited about the year.”

The Broncos will kick off the NFL’s preseason schedule at 7 p.m. CDT Aug. 1, when they play the Atlanta Falcons in the annual Hall of Fame Game in Canton, Ohio.

FOR MORE OF AL.COM’S COMPREHENSIVE COVERAGE OF THE NFL, GO TO OUR NFL PAGE