Houston Texans star DeAndre Hopkins opened up about the remarks the team’s late owner made during the height of the national anthem kneeling controversy that swept the league in 2017.

Then-Texans owner Bob McNair, who died in November, told fellow owners during a meeting that “we can’t have the inmates running the prison,” according to ESPN. The comment had a negative effect on several players, including the team’s breakout wide receiver Hopkins.

Hopkins told GQ magazine in a story published Tuesday that McNair comments made him feel “like I’m a slave again.”

“It’s hard for people to understand what that means, when your family was slaves. You can’t relate to something like that if your great-uncle’s not telling you stories about their parents or their grandparents and what they went through,” he told the magazine. “Not even too long ago, people couldn’t even drink out of the same water faucet. Not even 100 years ago.”

Hopkins added he seriously considered sitting out a game because of the remarks. 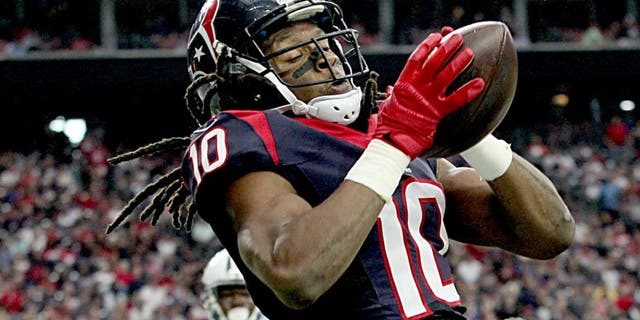 DeAndre Hopkins opened up about Bob McNair’s comments about players who protest during the national anthem. (Photo by Thomas B. Shea/Getty Images)

“People don’t understand,” he said. “I’m from South Carolina. I’m from a real cultured state, where there’s still racism daily. Still, places are segregated. I really didn’t want to play in that game, dog. I was like, ‘S–t, this is bigger than a game, man.’ I’ve got to stand for something [my children]. If their daddy don’t stand up, then what the hell am I going to tell them?”

He added: “It feels like I’m a slave again. Getting ran over. Listen to the master, go to work. But I took into consideration that he was older—RIP, his soul. He was a good man, but some people they don’t really… When you grow up certain places, you talk a certain way.”

Hopkins also expressed his frustration with the franchise after the team didn’t sign Colin Kaepernick to take over for DeShaun Watson when he went down with an injury in 2017.

“Yeah, I was upset. Everybody needed to give Kaep a look,” he said. “He can help a team win. I’ve seen a lot of quarterbacks that’s not as good as Kaep, but teams don’t want the heat behind them.”

Hopkins, 27, is one of the best wide receivers in the NFL. He was selected as an All-Pro for the second time after a great 2018 season. In six seasons with Houston, Hopkins has recorded 528 catches for 7,437 yards and 47 touchdowns.